The Warrior Monk and Secretary of Defense 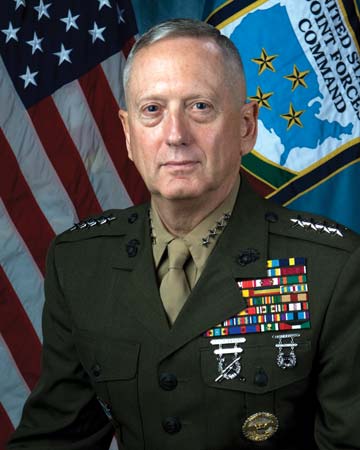 General James Mattis (b. 1950) -A career warfighter born in the small college town of Pullman, Washington, was nominated by President-Elect Trump to become his Secretary of Defense. Joining the Marine Corps in 1969, he enrolled in the ROTC program at Central Washington University in Ellensburg, Washington, and, upon graduation (with a degree in History), was commissioned as a Second Lieutenant in 1972. Much has been written about General Mattis, some of it accurate, some of it hyperbolic.  In this modern era of nearly continuous war in American history, James Mattis's combat and command resume reads like a recitation of this country's post-Cold War conflicts:

Gulf War (1991)-Lt. Colonel Mattis commanded the 1st Battalion, 7th Marines, which was one component of Task Force Ripper, which played a key part in the liberation of Kuwait in the Second Persian Gulf War against Iraq.

Iraq War (2003-2011)-Mattis led the charge into Iraq as a Major General commanding the 1st Marine Division. During his time in Iraq, his Marines took part in the Battle of Fallujah, which became the heaviest urban fighting the Marines had engaged in since Vietnam.

U.S Central Command (2010-2013)-As head of Central Command, Mattis oversaw the wars in Iraq and Afghanistan and was responsible for a region that includes Syria, Iran, and Yemen. While in this position, Mattis argued for increased U.S. pressure on Iran, which Mattis felt was a greater threat than the Obama Administration believed.  President Obama fired Mattis in 2013.  Mattis retired soon after as a four-star general.

A significant aspect of his career came in partnership with General David Petraeus, as the two of them developed the Army and Marine Corps counterinsurgency (COIN) doctrine that is in use today by the military in the ongoing wars.

James Mattis has been described as a "Warrior Monk," and as "Mad Dog Mattis," for both his lifelong bachelorhood, coupled with his devotion to an intellectual understanding of war and history (he amassed a 7,000 volume library of military history and world history books), as well as for his penchant for colorful quotes, some of which got him into trouble with his superiors. In a conversation with his officers in Iraq in 2003, in reference to the fact that insurgents can appear to be friendly civilians one moment, and armed enemies a moment later, Mattis warned his men to be both professional and prepared when he said: “Be polite, be professional, but have a plan to kill everybody you meet.” Taken out of context, Mattis sounds like a psychopath, but in the proper context of advice to soldiers and Marines in a fluid asymmetrical combat environment, it makes perfect sense.

As his troops prepared to invade Iraq in 2003,  Mattis wrote a letter to his command with his admonition on his expectations in the coming war:

One of the comments Mattis said in public that made the news at the time, and earned him some negative press came at a panel discussion in San Diego in 2005:

“You go into Afghanistan, you got guys who slap women around for five years because they didn’t wear a veil. You know, guys like that ain’t got no manhood left anyway. So it’s a hell of a lot of fun to shoot them. Actually it’s quite fun to fight them, you know. It’s a hell of a hoot. It’s fun to shoot some people. I’ll be right up there with you. I like brawling.”

Mattis faced confirmation by the Senate, where he got a waiver from Congress to take the Secretary of Defense post, as he retired from the military less than seven years ago.  The law, 10 U.S. Code § 113, which states in part:

The last retired general to serve as Secretary of Defense, George C. Marshall, also had to receive a waiver from Congress to take that position in the 1950s.

On January 20, 2017, the same day Donald Trump was inaugurated as the 45th President, the Senate confirmed the nomination of James Mattis to be the new Secretary of Defense, by a vote of 98-1. He reported to the Pentagon the next day, Saturday, January 21 as the 26th Secretary of Defense.

Mattis' tenure as Secretary of Defense came to a close as he found it increasingly difficult to work with a president whose worldview was strikingly different from his own. In a resignation letter (which can be read below) dated December, 20, 2018, Secretary Mattis lays out his beliefs in a an America that creates and honors alliances and that opposes the authoritarian model of both Russia and China, and that he feels that his beliefs no longer match the president's beliefs. While the letter states that Mattis would stay on until the end of February, to ensure a smooth transition, President Trump soon declared that Mattis would be out by January 1, and replaced with an acting Defense Secretary.

During Mattis' time leading the Pentagon, he tried to balance President Trump's seeming affection for Russia's leader, Vladimir Putin, and his penchant for seemingly uninformed decisions related to the ongoing wars in the Middle East and Afghanistan. After Trump announced his surprise pull-out of U.S. troops from Syria, Secretary Mattis decided to resgn in protest of this very controversial decision. (Read our Op-Ed on the Syria Troop decision here).

With rifle and bibliography: General Mattis on professional reading

I Served With James Mattis. Here’s What I Learned From Him

General James Mattis, "In the Midst of the Storm: A US Commander's View of the Changing Middle East"-Video of General Mattis speaking on the Middle East

New Defense Secretary James Mattis arrives at the Pentagon, gets to work